Classic TCT is a fully functional Transient Current Technique for material studies. It is intended for studying pad detectors or similar structures with size of the structure of about the size of the laser beam – few mm. Although it is a portable device, its state-of-the-art performance makes it suitable/ready for any kind of material research on difference semiconductors with appropriate band gap such as silicon or silicon-carbide. In addition, the device is useable for educational purposes where a large variety of different semiconductor properties can be studied which we not long ago considered a top notch in scientific research. 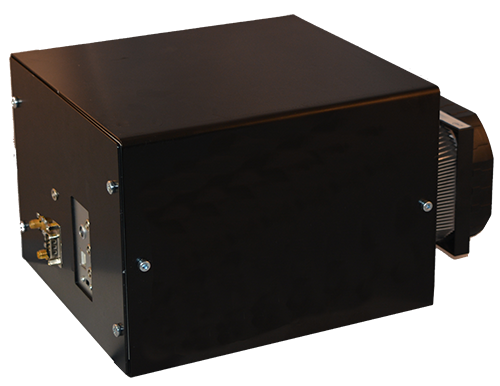 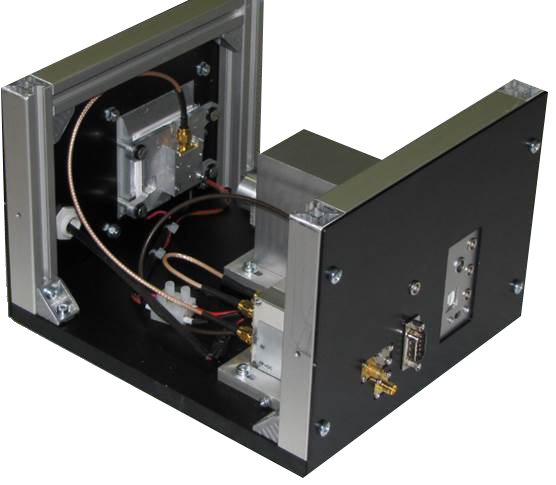 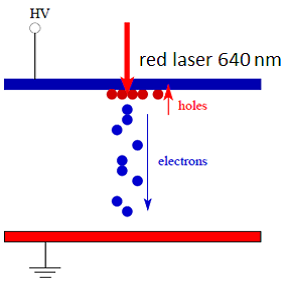 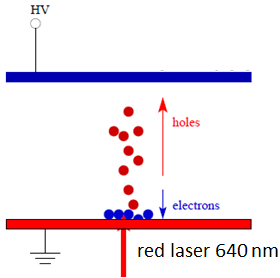 than the band-gap of the semiconductor. Each photon creates therefore an electron and a hole – a so called e-h pair. Upon creation these free carriers:

The free carriers can be swept by collection electrodes: electrons by anode and holes by cathode. However on their way to electrodes they can:

The wavelength of the light determines the penetration depth in semiconductor, i.e. the pattern of generated e-h pairs in the semiconductor. For example the red light generates carries only in first few microns at the surface of a silicon wafer, while infra-red light (1064 nm) generates e-h in few mm (exponential absorption).

The movement of the carries induces the current in the electrodes which is amplified and recorded in the oscilloscope. The current is given by a simple equation:

where Ne-h is the number of e-h created at a given place in the detector e0 elementary charge W thickness of the sensor, 1/τeff,e,h probability of carriers to be trapped and v(t) velocity of their travel, which is proportional to the electric field v=µ(E)∙E. It is clear that in a device where trapping is negligible (most silicon devices) the shape of electric field and mobility can be measured from the shape of the current. In order to be able to measure meaningful results the laser pulses have to short enough, few 100 ps.

The schematic view of a TCT experimental setup is shown in Fig. It consists of several vital parts:

For the full functionalities and specifications of the devices please have a look at our technical documentation.

Classic TCT comes incorporates all necessary components in an experimental box with approximate dimensions of 30x30x30 cm3. It incorporates all necessary pieces: Bias-T, wide band current amplifier and laser with the driver. The samples are mounted on the Pelier cooled surface with large powerful fan for the heat sink, which allows for studies in relatively large temperature range.

Wide band amplifier has three connectors (outputs are two with different amplifications, where only one is operational): OUT, IN and POWER. The latter is connected to the connector at the chassis while OUT is also accessible at the chassis back.

Laser is mounted inside the box with its back-side accessible also at the chassis back. The connections are the following.

Particulars lasers are very compact and lightweight since they combine the laser head and driver in the single housing. They were designed for Transient Current Technique, but their applicability is far broader. They offer short pulses (350-4000 ps) with pulses energy corresponding to creation of e-h pairs in silicon equivalent to up to 1000 m.i.p. The lasers can be triggered internally triggers or externally. Internal triggering can be simple with a fixed frequency or a pattern of pulses can be programed with trigger(s) provided independently of the laser/driver pulses.

USB – communication with PC
TRout (driver) – trigger output connected to the circuitry triggering the laser diode)
TROut (processor) – trigger output connected to the microcontroller independently on driver (see software manuals for details about the usage of laser in this operation mode)
TRin – trigger input for external triggering of the laser pulse. Note that in this mode the switch for selection of the operation mode should be in “Ex. Tr.” (External trigger).
Ex. Tr./Int. Tr. – external / internal triggering of the laser
Power – 2 pole lemo connector for power supply 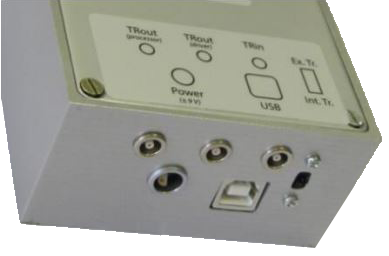 Only Particulars power supply should be used to power the lasers. At the moment they are designed to be operated only at 220V/50 Hz (AC). A two pin Lemo connector is used to deliver the power to the laser. 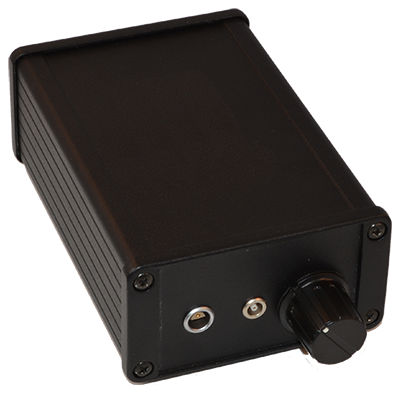 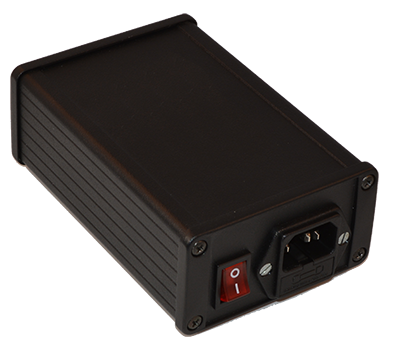 The laser can have two different outputs:

While fibre connection should be used with optical system, focused-collimated head can be used to directly illuminated device. The collimator can be moved for few mm backward and forward in order to achieve desired collimation. Use the screw on top of the head and slide the collimator for desired position. 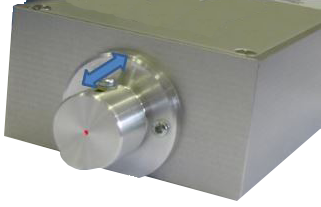 Mounting plane has approximate size of 5×5 cm2 with different options for attaching the box with the detector (see www for details). Laser is mounted in the way that it hits approximately the center of the detector box. The mounting plane can be moved in vertical and horizontal direction for few mm in order to allow for better alignment with the center of the laser beam. To do it lose the screws (red circles for vertical and green circles for horizontal movement in below figure) and slide the mounting plane in the desired position. The mounting plane is cooled by Peltier (80 W) which allows for reaching the temperature difference (room temperature – sample temperature) of around 30oC. The back side of Peltier is cooled by a fan. The temperature sensor (Pt-100) is mounted at the side of the cold plate.
Beware: there can be a systematic offset at the place of the sample and the point at which temperature is measured.
The power and control lines for the temperature control of the mounting plane (fan power supply, Pt-100 lines and power lines for Peltier cooler) are connected via the D-SUB connector at the back of the experimental box.
Beware: If you set the temperature below the dew point make sure that the lid is closed in order to limit the flow of the moist air around the cold plate/sensor. The condensation formed on the sensor can otherwise lead to potential electrical breakdown. 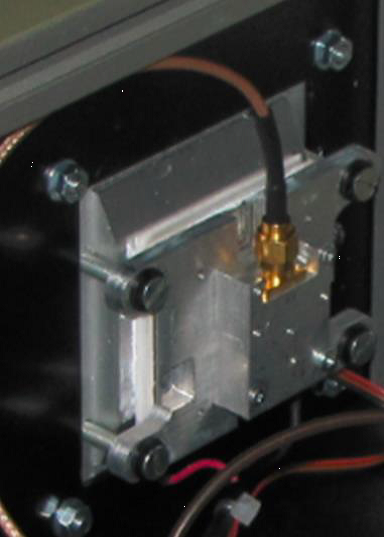 The back side of the experimental box is show in the figure below. 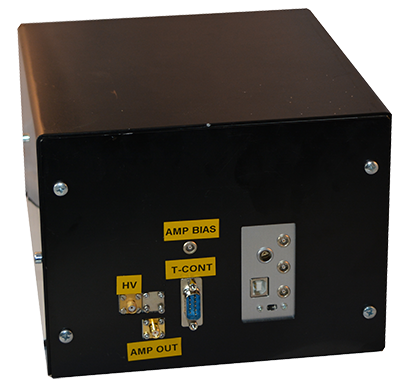 There are four connectors/connector regions at the back:

Beware: DC bias voltage and amplifier out have the same connector. Make sure that you don’t swap them.
The amplifier (IN) and bias-T (RF) are connected inside the chassis as shown in the figure below. The sample/detector is connected with Bias-T (RF+DC) input with the SMA-SMA cable as shown in the mounting table figure.

Please, disconnect all power sources before reattaching/reconnecting the cables.

4. Mounting the laser and sample

The laser is brought into the correct position and fixed into it by a bracket which is screwed to the base plate (green circles in below figure). An additional fixation of laser and bracket id done by a single screw (red circle in below figure). When properly fixed the laser will illuminate the center of the mounting plane. It is possible that the beam is not perfectly aligned with the desired illumination spot. Please use the screws to adjust the position of the mounting plane (see section 3). 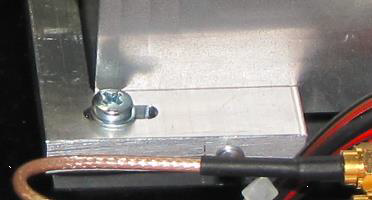 5. Connections outside the box

The output of the amplifier should be connected the oscilloscope, which is provided by the user. The DC connection is usually connected to HV through the bias voltage filter (provided by the Particulars).It has a SMA output and HV BNC connector for the input. Laser power supply comes with an additional power supply for the amplifier. The connection scheme outside the box is shown in the figure below. Here a PSI – DRS digitization board is used as oscilloscope. A schematic view is also shown without temperature control system which is connected via D-Sub connector to the temperature controller at the back. The temperature controller is optional. One can use Peltier contacts of D-Sub connector to connect a regular PS to the Peltier for manual control of the temperature. 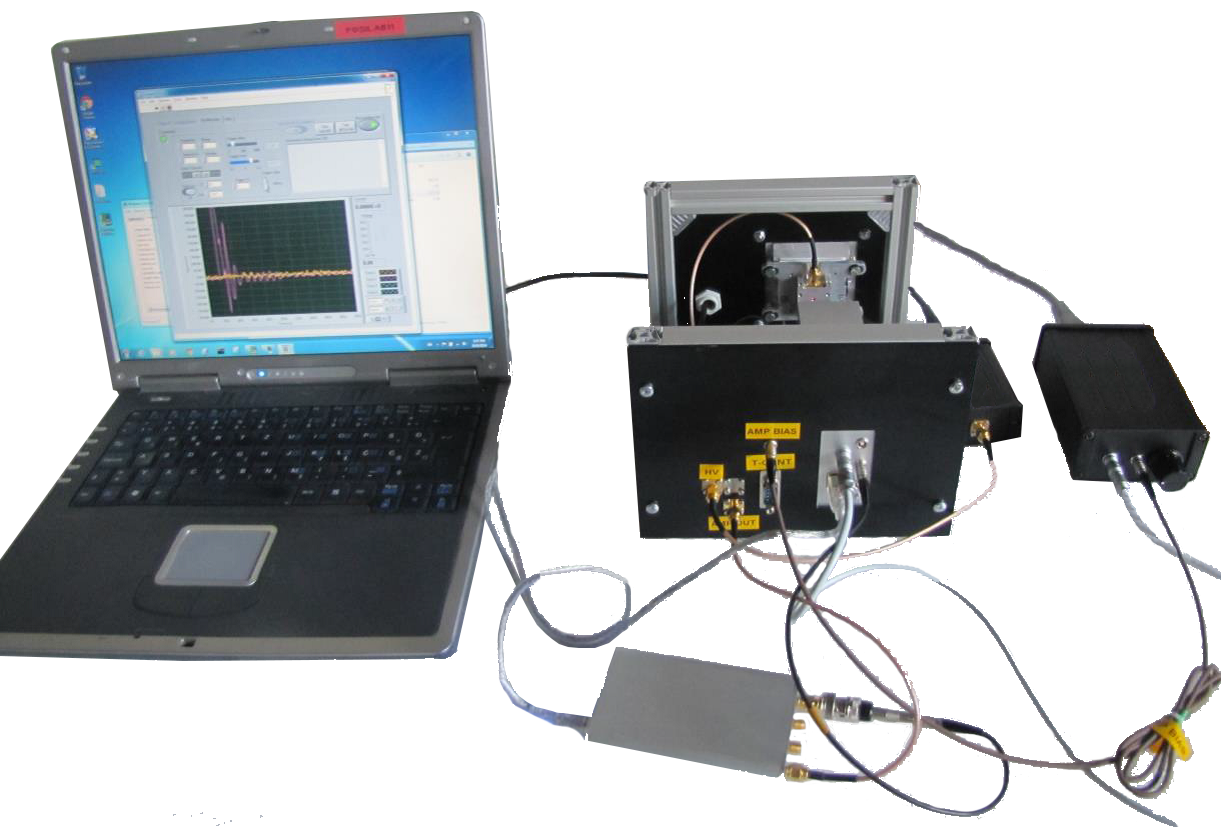 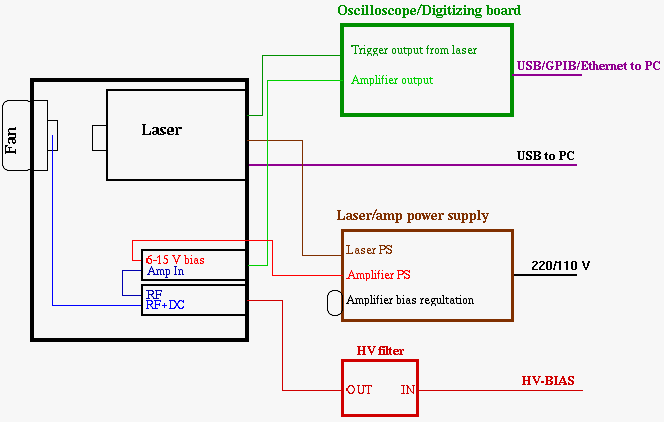