The Alibava System Classic is a portable readout system for scientific uses. This system uses a front-end readout chip, which was developed for the LHC experiments to read out microstrip detectors. The system is suitable to characterize the properties of irradiated and un-irradiated microstrip sensors. The system hardware has two main parts: a daughter board hosting the readout and a mother board. The first one contains two readout chips and has fan-ins and sensor support to interface the sensors. The last one is intended to process the analogue data that comes from the readout chips and from external trigger signals, to control the whole system and to communicate with a PC via USB. 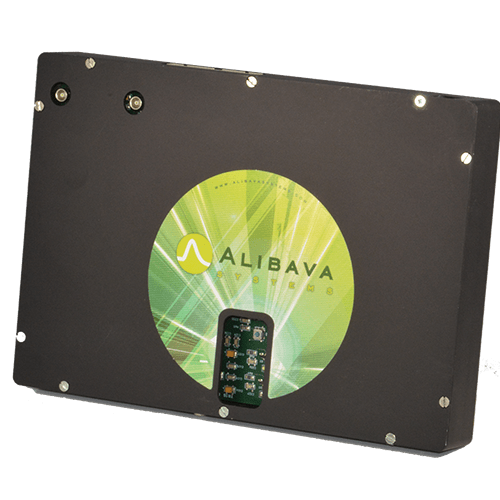 There is provision for an external trigger input (a silicon trigger board is available) and a ‘synchronised’ trigger output for pulsing an external excitation source (e.g. laser system). The system can operate with different types and different sizes of microstrip detectors:

Different flavours of detector boards are available to accommodate detectors of different sizes. The system is designed to work with a radioactive source setup and laser setup: useful for comparing results with the same detector.

Data acquired with the system can be easily processed using ROOT framework: some macros already developed.

A schematic of the Alibava System Classic: 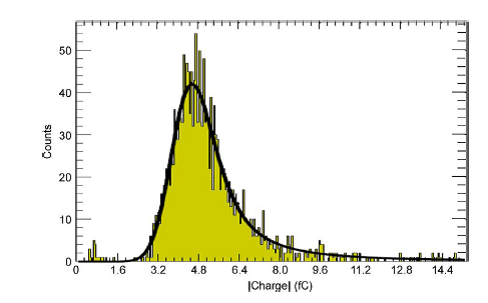 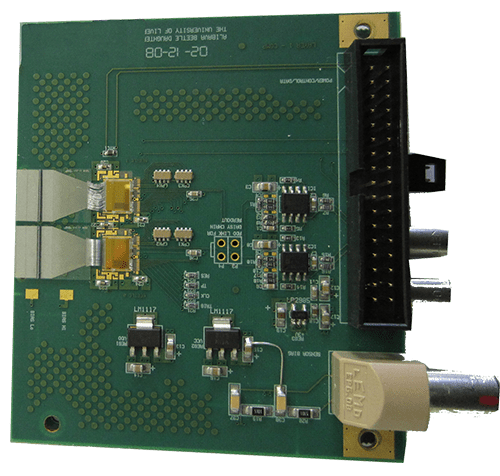 For this system the ASIC chip analogue output onto one port is used. In this case the analogue front-end pulse signal is sampled into the pipeline with the frequency of the ASIC chip clock (40 MHz). The peak voltage of the front-end pulse signal is proportional to the collected charge at the detector channel, the peak time of this signal is about 25 ns (depending on the load capacitance among other parameters) and the remainder of the peak voltage after 25 ns is below 30% (i.e. the ratio between the signal voltage 25 ns after the peak and the peak voltage). Therefore, a 65–70 ns pulse length is considered in order to reconstruct the pulse. For reading out a particular position of the pipeline, a pulse of 25 ns (TRIGGER) is generated by the mother board.

This pulse is sampled with the falling edge of the readout chip clock (CLK). The analogue pipeline latency has been fixed to 128 clock cycles, so this TRIGGER pulse is generated 128 CLK cycles after a particular front-end signal point has been sampled and stored in the pipeline. For the laser setup the TRIGGER pulse is generated for each event (i.e. laser pulse) with a delay programmed by the user regarding the event occurrence. For the radioactive source setup, the TRIGGER pulse is generated with a fixed delay regarding the event occurrence (i.e. a particle crossing the detector) and a time stamp for each event is obtained with a TDC in the mother board. Therefore, just one sample of the analogue pipeline is required per event in both setups. The pulse shape can be reconstructed by acquiring enough number of events.

The main task of the system software is controlling the whole system and processing the data acquired from the sensors as well as storing this data with an adequate format in a PC for further processing.

The software has two levels. The low level software deals with the data exchange by USB with the motherboard and with the low level data processing. No driver design is required at this level since the manufacturer of the USB controller provides with a ready-to-use driver (Virtual Com Port Driver). The high level software implements the GUI for the communication between the user and the system, the data monitoring as well as the data output file generation.